Last year’s Leo Forum’s banquet night theme was Black and White and this year it was just Banquet Night and I didn’t since when it’s called Moving Forward with a gold and silver theme until I was told when I arrived at the venue which was the Sunshine Banquet Hall. They gave us silver and golden star to be paste on the shirt or anywhere that can be seen but somehow, people took it off after some times.

I was not really fancy that night, very simple. A shirt and a tie and that’s me. Wanted to get a blazer before the event but didn’t really have a time to go and custom made one. I got a a tiny body so it’s not easy to look for one that suit me in the shops. The meal was better than the night before because it’s not self service buffet, buffet is not fun because I hate queuing up for food and moreover there’s so many delegates. To be honest, I didn’t really eat much for this course dinner. One reason was the time interval between food was very long and I was so tired during that time as I just slept for like 3 hours the night before. It’s a little bit stupid to see people moving around with the “Silent Please” sign, it’s just too noisy in the hall. One reason was, the food was not served early. Haha. We sat really very very far from the stage and there’s not much entertainment going on that night. It was the top award giving ceremony. I got a Outstanding Vice President award in the afternoon on the same day and was hoping for a Top Vice President award but it went to someone else in Kuala Lumpur. Though, our club did got a Top Tresurer Award and that’s Jin Jie. =)

Food was not really important for that night as well as entertainment too. Award giving ceremony was already over and nothing much to be concern except moving around for photos. It’s the last night and need to take more photos for memories.

Photos speak for now, it’s just like a photograph night. Kok Sheng of Leo Club of Penang (City) and also from KOKahKOK and also the official photographer for Leo Forum. Incomings and outgoings board of directors of Leo Club of Chung Ling High School. With Leo Idols of 2009 and Digi Superstar, Azizi. 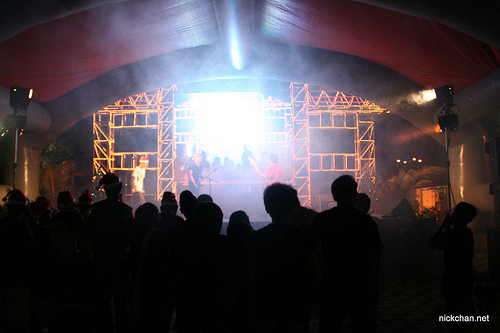